All of the other ride stories on this blog follow the basic theme of “set a big goal, worked hard, had a cool adventure, accomplished the goal”.

Not this one.  At least, not exactly.

As most anyone would say, you can’t be afraid to fail.  Goals have to be hard enough and high enough that you won’t always reach them.  No matter what the goal is.

With that mindset, after contemplating it for the last couple of trips to Taiwan, my co-worker Mike and I set off on a cool, rainy weekend morning to attempt to climb the Wuling Pass.  The Wuling Pass is Taiwan’s highest paved road, topping out just over 10,000ft (3275m).  It is the destination for what is becoming one of the best known and hardest group rides anywhere: the Taiwan KOM Challenge.

I briefly flirted with the idea of riding from my hotel.  After considering the prospect of the longest single climb I had ever attempted in the middle of what would be a ~150 mile day, I came to my senses.  With a smart co-rider who had no interest in a 14+ hour day on the bike, we drove to the base of the climb in Puli.

Mike and I had our doubts from the beginning.  To reach the summit would require the longest time Mike had ever ridden, the longest climb I had ever done, but even more than those, we had both been fighting a cold/flu bug much of the week.  But what’s the worst that can happen we thought?  If we reach our limit, we simply turn around and coast back down the mountain.

Leaving the hotel about 5am, we found a safe parking spot at a hospital and rolled out at 640am, just after dawn.

The first 10 miles gradually rose about 1000ft, allowing us to warm up on the chilly morning.

From the start, my pre-ride enthusiasm for the descent waned due to wet roads from overnight rain.  On we went, passing through a few tunnels and climbing into the clouds.  Traffic wasn’t bad, but there was more than an occasional tour bus, the road we rode also being the way to the famous Taroko Gorge- Taiwan’s most visited scenic destination. 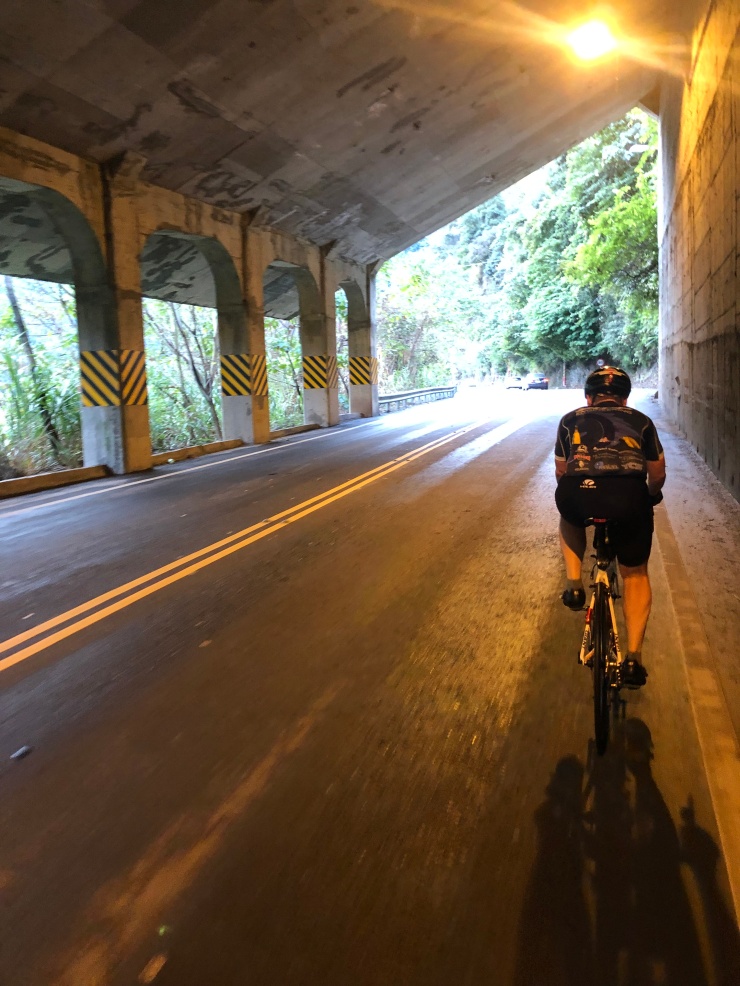 We slowly progressed upward, taking short breaks for food, photos, and quick breathers.  And to pop a few cough drops that fortunately I brought along. 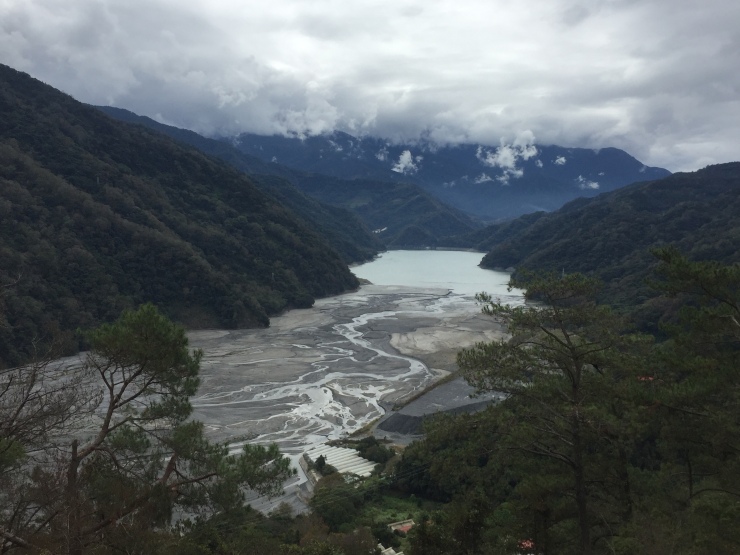 Although the total climb averages a manageable 5%, it is nearly continuous, with only a couple short respites of a few hundred meters.  Some sections reach 12-14%.  Even with a compact 50-34 crank and SRAM’s WiFli 32 tooth cassette, it was all I could do at times to keep turning the pedals.  At least the magnificent views kept my mind off the intensity of the climb.

After just over 4 hours of riding, we stopped for another short break and saw a road sign indicating a descent- which of course meant we’d have to climb it on the way “back down”.

With about 3000 ft still to climb to the summit, after some deliberation, Mike and I talked ourselves into turning around.  Or was it me that talked him into it?  I think maybe so.  Giving up short of a goal is not something I do very easily, call it stubbornness or tenacity or a little of both.  So turn around we did, stopping briefly to put on warmer attire with the speed of the descent.

After 4:10 to cover the 23 miles of climbing, it required only 1:20 including 2 stops to get back to our starting point.  The wet roads required caution but not extremely so and most of the descent was exhilarating.  My favorite part: catching up with a motorcycle and several cars in an especially twisty section and hanging on their bumper, even passing them for short stretches, going back and forth for a couple miles.

My max speed only reached 37mph- not remarkable- but descending for over an hour was pure fun!  The last 10 miles flattened out and the slight descent allowed us to pedal steadily and hold speeds of 22-24mph.

On the last few hundred meters slightly uphill back to our parking spot, I felt good- 5 hours of riding is not a big deal.  So I got out of the saddle and thought, “I’ll leave Mike on this last stretch”.  Bad decision.  Although he’s 20 years younger and a much stronger rider, I anticipated he’d be tired.  My estimation was slightly off….  Mike quickly pulled up beside me, casually said something like “oh we’re doing that?”  Then just as casually and effortlessly dropped me.  Hmmm.  Need to remember what I’m good at- like double digit hour rides.  But not winning many sprints, no matter where or when they take place!

If Mike and I had both been feeling 100%, there is no doubt we would have pressed on toward the summit and Wuling Pass.  But this wouldn’t be our last trip to Taiwan and with several days of work yet to go in the trip, we didn’t want to crush ourselves.  Even aborting the climb 2/3 of the way up, it was still Mike’s longest ever ride time-wise and very nearly my longest climb.

Despite failing to reach Wuling, we still felt pretty good about ourselves afterwards!  And the one way we always celebrate in Taiwan: with a Taiwan Beer of course!

Story to be continued….  In Mike’s words: “We are coming for you next time Wuling!”

This photo is from the previous day’s group ride- the “Pig Coffee Shop”, too fun not to include: