How many times in your life do you have the opportunity to not just watch but actually join alongside a world record?  Very, very few.  Realizing this led me, only a couple weeks after I finished riding across the US, to watch Mark Beaumont set off to attempt to retake the global circumnavigation record by bike.

In 2007, Mark rode solo and unsupported around the world in 194 days to establish a new Guinness World Record.  After his record was broken several times, and with a number of rule changes, Mark was attempting to retake the record- in an utterly mind boggling 80 days.

I’m not sure if I would have ridden across America if not for Mark.  Reading his book, The Man Who Cycled the World, planted the seed in me to take on a challenge bigger than myself and ride across the country.  I wanted to ride along with Mark during his latest attempt- as other cyclists were- yet I also hoped for an opportunity to tell him my story and how he had inspired me.

Mark and his team had prepared for years for the 80 Days attempt, and published an approximate route.  His North American leg started in Anchorage, crossed Canada, and went through the US in North Dakota, Minnesota, and Wisconsin.  Plotting his estimated schedule and monitoring his progress, I hoped I could intercept him around Labor Day on his closest approach to Indiana, when he passed through Wisconsin a bit northwest of Green Bay.  Labor Day was critical, since I had used virtually all my vacation during the US ride.  I needed the long weekend to get all the way to northern Wisconsin, ride, and return to Indiana.  The timing could scarcely have been more perfect.  If Mark had been a day further ahead or behind either way, it would have been impossible to meet up and ride along.

As he rode closer I made plans and plotted my own route to intersect him.  My plan was to drive 5 hours to Ludington, Michigan then take the SS Badger ferry across Lake Michigan with only my bike and the bare minimum of supplies.  On the Saturday before Labor Day I drove up, took the 4 hour ferry crossing, then rode about 80 miles north to intersect Mark’s route as he approached from the west.

My calculations ended up being off by about a half day, so Labor Day morning I meandered west along his approximate route.  As I did so in the early afternoon, my wife Alisa was awesome as always, watching both Mark’s and my own GPS tracker on her computer: 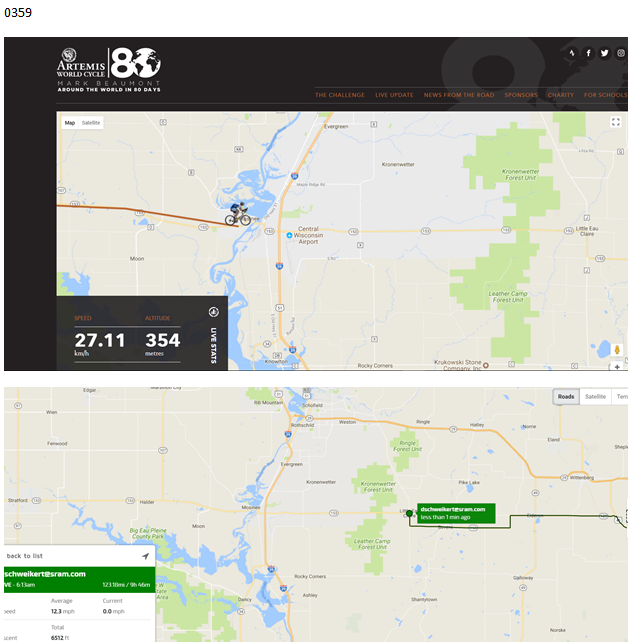 Then she directed me in with frequent texts that popped up on my Garmin.  After 125 miles of riding, I reached a crossroads where I had to stop and wait.  There was another crossroads further west that Mark was approaching.  If he turned north and not west I might not be able to catch him. 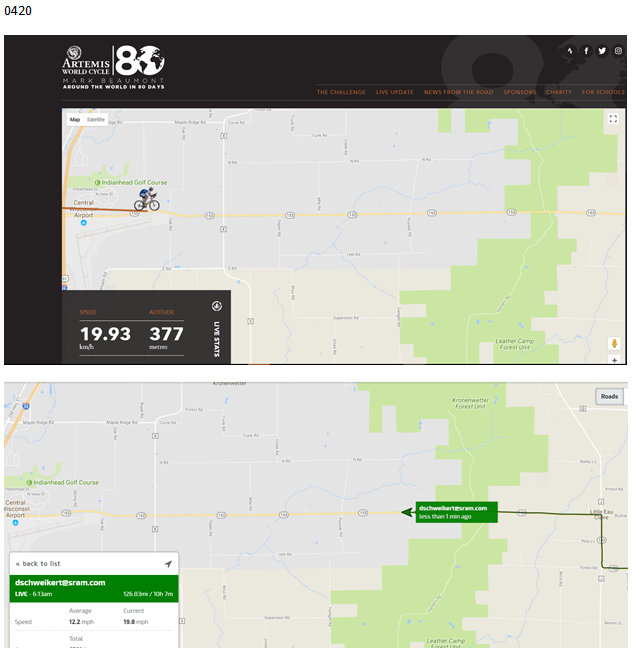 Finally I saw Mark had continued west on the road where I was waiting, so I pedaled slowly as anticipation built.  Here I was- about to meet and ride alongside a world famous athlete that I had never met- who had a huge influence on my own adventures and challenges.  Finally his flashing headlight and support RV came into view as he rode up, another cyclist with him as well.

Mark gave a friendly wave as he spotted me waiting on my bike to take a picture: 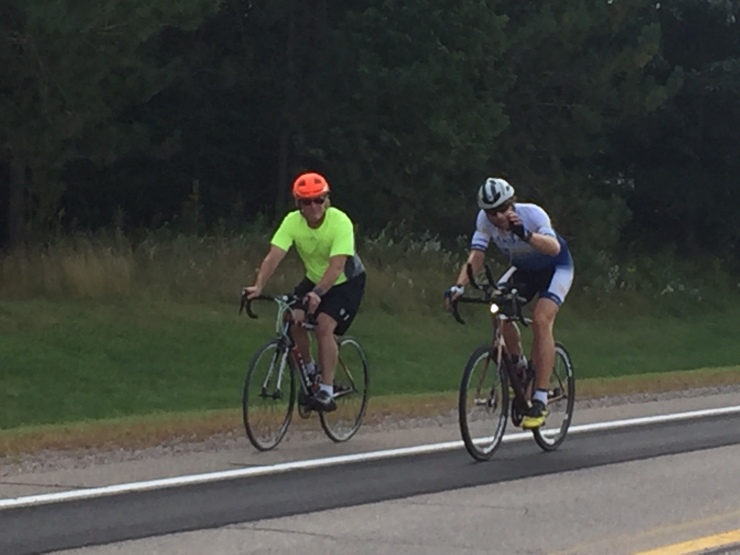 I rode with Mark and his support crew for about 75 miles, over 5-6 hours.  We talked at times, finding we had a bit in common, such as being dad to 2 beautiful girls.  I was able to tell him my story of wanting to meet the person who had inspired me to go beyond myself and take on challenges that I probably wouldn’t have otherwise.  We talked about other adventures, how he had planned 80 Days, and bikes and gear, especially once he learned what I did for a living. (I was happy to learn that Mark had SRAM components on his cross bike!)

Wearing my World Bicycle Relief kit, I also told him why I rode, and he was quite familiar with WBR.  In fact, he rode for a charity of his own on his world record ride.  Knowing that not much can impress someone like Mark when it comes to endurance sports, I distinctly remember him commenting when he learned my age. “You’re pretty fit for 50” still brings a smile and a chuckle, especially to my family.

This is the time for a confession.  In private moments, I have dreamed of attempting to break his record.  I have better cycling equipment for one!  It’s fun to daydream, much like it is about winning the lottery.  If I were 20 years younger, as crazy and unlikely as it is, I might give it serious thought.  But- especially after reading more about 80 Days- the combination of planning and numerous other skills required to reach such an accomplishment are probably even more impressive than the endurance to ride 16 hours a day for 2.5 months.  I think Mark himself said that in many ways, he had the easy job.  All he had to do was ride the bike!

The time passed too quickly for me (and probably not nearly quickly enough for Mark!)  As he approached Lake Michigan and darkness set in, he headed north along the coast.  His daily routine was to ride until 9:30pm with a daily average of- wait for it- 240 miles!  That was further than I had ever ridden in a single day, and I consider myself a fairly competent endurance cyclist.  Waving as I headed off, I thanked his crew for allowing me to ride along, wished them luck, and headed back south towards Green Bay.  I stopped briefly to reserve a hotel and then plotted a route to it on my phone.  The day was finished at 218 miles- a new lifetime best! (at the time)  The Strava ride is here.  After my daily posts across the US, it was my most kudo’d (the Strava equivalent of a like) ride of the year.  Wolfing down an entire pizza in my hotel room, I planned yet another early morning start.

The next day I was up and on the bike at 6am (Mark was up and riding at 4am- every day!)  I finished another 100 miles into gorgeous Door County, Wisconsin all the while wishing I could have done 200.  But the ferry left at 1pm, and I didn’t dare miss it.

I finally got home after midnight and, after 3 1/2 hours sleep, managed to get on the bike to ride to work the next day.  It’s what I do.

As I relaxed on the Badger after riding 400 miles in less than 48 hours (keeping in mind that Mark rode- on average- 80 miles further in the same period of time for his entire 2 1/2 month ride), I thought about what was next.  Being out of cell service for 4 hours was perfect, providing quiet thinking time that quickly led to the realization these long endurance rides had to continue.  World Bicycle Relief would continue to be the reason why I rode, and the adrenaline rush I felt from the past couple of days was not something I could let go.

Needless to say, I followed Mark’s progress closely over the next 13 days, as he rode into Paris and finished his 18,000 mile circumnavigation in an amazing 78 days and 14 hours.  He wrote another book about that adventure, and I was thrilled to purchase a signed copy directly from Mark: 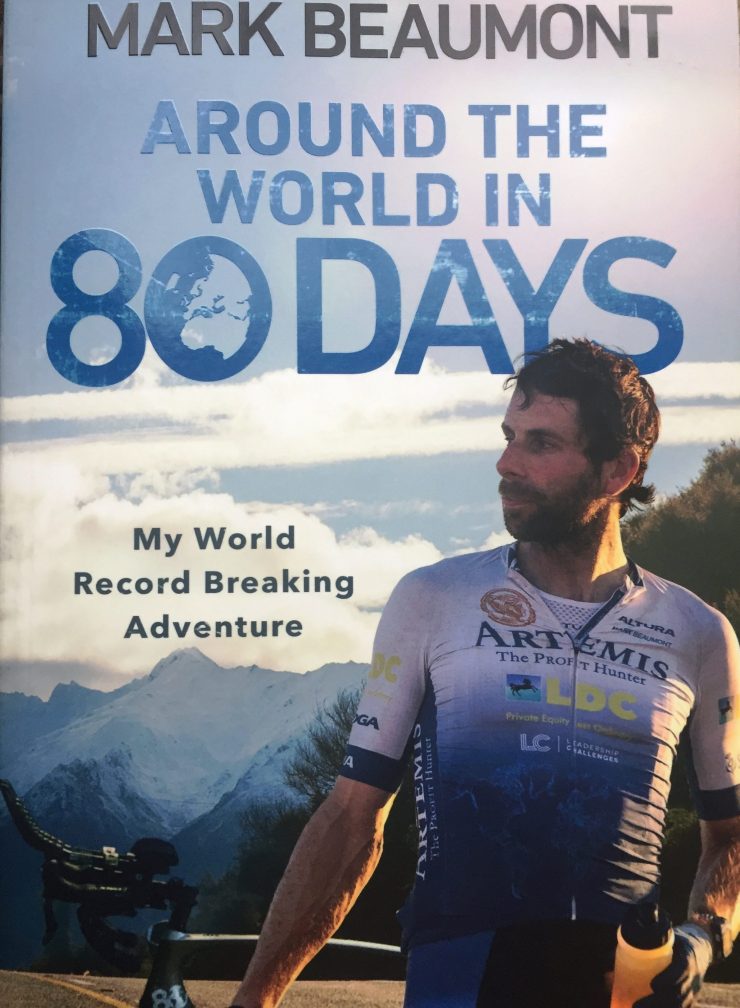 The best way I can describe the 80 Days ride along is to think about your favorite sport.  Imagine shooting hoops with LeBron James in an NBA arena.  Or catching passes from Andrew Luck during the Super Bowl.  Imagine playing a pick-up game at Boston Garden or taking batting practice at Wrigley Field.  That’s one of the most beautiful aspects of cycling.  Not only did I get to ride with a world famous cyclist who inspired my efforts for WBR, but I did so in the midst of his actual record-setting performance.  This exhilarating feeling brought me back to a weekend of riding in the Pyrenees just a couple of years ago, the path of which included several climbs featured in the Tour de France.  These memorable experiences keep me going on the toughest days, and remind me that Why I Ride is much bigger than just me.